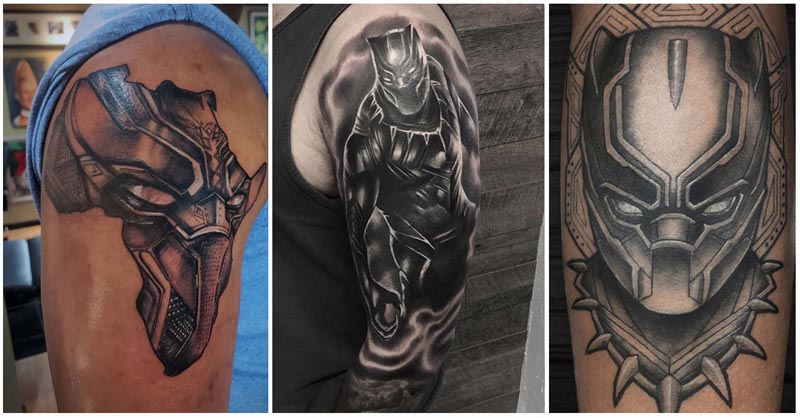 Black Panther tattoos are some of the hottest Marvel tattoos right now. Marvel fans might also want to see ideas for Moon Knight, Loki, and The Avengers tattoo designs.

Black Panther was one of the most revolutionary movies that Marvel, or any other major film studio has released for a mass audience in a long time. Think long and hard about how many superheroes fit the same look as Prince T’challa.

I recently read Bob Iger’s book The Ride of a Lifetime and saw how difficult it was to get this movie into publication. Everyone fought it, and everyone had their doubts about how successful it would be. Not Marvel, and not Disney.

“Wakanda Forever” has been proclaimed lately by everyone, everywhere and for whatever they think necessary. It is a movie that proved people of different color could be a superhero. That was huge.

Think of Thor, Spider-man, Iron Man, Captain America…they all have the same look. It wasn’t until Black Panther that our entire world was able to see the power and strength by being different.

The tattoos in this post are all in respect to that new power. That new respect, and that new understanding that heroes can look like anything.

Black Panther is synonymous with Africa. Here is the combination of both Black Panther and Africa. The mask is the continent on this man’s shoulder. This is a common theme throughout a lot of the Black Panther tattoos, that he represents all of of Africa.

A traditional black and white tattoo of Black Panther’s face is fairly ironic, since his entire suit is only black. Using all black ink makes it hard for a tattoo to pop, but this one sure does. The detail in the face stands out because of the ink usage. Heavy to not, it make a clear difference in this tattoo.

This is one of the most detailed pieces that we’ve seen so far. Everything about this tattoo, with the detail of the face, to the detail of the suit is top class. There are few tattoos that cover an entire forearm, especially as nice as this one!

Back of the Palm Crest

The back of this man’s palm now has the traditional Black Panther logo on it, it in red and black. These are not the typical colors. This design and emblem are much different than we’ve seen before. You can still see the idea and thought behind it, which clearly represent the Black Panther and Wakanda.

Wakanda, Africa and the Black Panther

A cover up tattoo is a difficult one. On the left there is a green dragon serpent surrounding a sword, and on the right is the cover up. A bright and vibrant tattoo of the Black Panther used to cover up the old one. the detail in all of the suit, wrapped around, brings a bright great tattoo.

The Black Panther is described by action scenes. This is much different, only a silhouette of Black Panther’s head. The special necklace is also there, and is the feature of this tattoo. The shading here is different, since it is a lack of ink that creates the shading. This is a formal tattoo that will look great on anyone, anywhere.

Spiderman, Thanos, Star Lord and the Black Panther, all tattooed in the same collage. The anger is obvious in the Black Panther’s eyes, even though there is nothing but black and white. Once again, the necklace is a focal point of this tattoo.

In a very differently designed tattoo Black Panther, this one features the Black Panther face, with the claws building off of the chin. Since I don’t speak Wakandan, I’m not 100% sure what the symbols mean, but the whole tattoo flows together wonderfully.

This wrist tattoo has much more vibrant colors than the rest of the Black Panther tattoos. At the end of Infinity War, we thought Black Panther to be dead. This tattoo may be in response to that, as it shows bright colors of life. The purple sprinkled in to the tattoo was something that was close to Wakanda, if you followed the movies closely!

The power of the Black Panther is in his fist. This tattoo exemplifies the power from his fist. The multi-colors in the suit stand out and make this tattoo pop on this mans arm. Everyone depicts Black Panther with the strong black suit, but this person took it differently making this a more colorful piece.

There is nothing to look deep into about this tattoo. There are no ironies, or no specific details we are missing. This is simply a tattoo of “Black Panther” right inside the elbow. A simple and to the point tattoo!

As is the case with many of the Black Panther tattoos, the necklace is important. A lot of the tattoos feature his necklace as the point of his power. There are few that don’t include it, and this specifically uses it as a focal point. The face is greatly detailed, along with the shading throughout the entire mask.

The Black Panther is represented in both Hollywood and cartoons. There is a combination of the two, but what stands out is the Hollywood version. This person is obviously focused on the cartoons. This is a much different version than we get from the movie, and that doesn’t subtract from his superiority. This simply black and white tattoo stands for much more.

Prince T’challa must be ready to fight at all times, to both protect his throne and his people. In this chest tattoo, he is exemplifying his actions of fighting. There is strength and courage, and a willingness to fight that is ripping through this tattoo. As most Black Panther tattoos show, black and white are the strongest way to show his character.

Making a tattoo a portrait is a true art. Although I can only guess as to which body part this is (I’m guessing bicep because of the elbow) this tattoo is exquisite. The movie version of the suit is much more detailed than the original, which shows in this tattoo. The green from the fields behind Black Panther in Wakanda is what I’m assuming the background.

Everyone wants to recognize the hero. However, this individual wants to recognize the villain. Black Panther is one of the few movies in which the main character learns a lot from the villain. This beautifully descriptive tattoo of Michael B. Jordan as Killmonger, screams detail. From the ring necklace, to the coat, to the braids in his hair. This is a truly one of a kind tattoo.

There is a great darkness to this tattoo. There is no color, no a lot of skin showing, and a WHOLE lot of dark ink. The Black Panther piece of this tattoo stands out on this man’s bicep because it is vibrant. The strength and power behind the tattoo adds to this wonderful sleeve of tattoos.

The Real and Perceived Black Panther

The Black Panther was obviously designed with a specific animal in mind. That animal is used in this collaborative tattoo describing both the real animal and the superhero. The detail of both faces make for this detailed and descriptive tattoo of both Black Panthers.

What is the Meaning of a Black Panther Tattoo?

The Black Panther is a superhero who first appeared in Fantastic Four #52 (July 1966). The character, created by Stan Lee and Jack Kirby, was inspired by the 1966 film of the same name, which starred a black actor as an African king.

This character has been a source of inspiration for many people and has become a favorite among many fans. The Black Panther symbolizes strength and power as well as wisdom and intelligence. With these qualities he is able to defend his people from threats such as racism or any other form of oppression that may arise in society. He also represents leadership skills that can be used for good purposes or bad ones depending on how they are used by their owner’s intentions.

The Black Panther tattoo design symbolizes strength and power as well as wisdom and intelligence. With these qualities he is able to defend his people from threats such as racism or any other form of oppression that may arise in society. He also represents leadership skills that can be used for good purposes or bad ones depending on how they are used by their owner’s intentions.

Prince T’Challa and the Black Panther are obviously one and the same. They both are fighting for their country, and their way of life. The tattoos that are posted above are symbols of one of the greatest characteristics of the Black Panther, strength. He is strong, losing his father, while taking over the entire country. The strength of this post is how Black Panther stands out, even though black ink is what creates his tattoos. He is such a recognizable figure that his face will never be unknown.

While “Wakanda Forever” is just a statement made in Hollywood, it is something that resonates with everyone. Each city throughout the country going through hard times can associate themselves with the fictional Wakanda. These tattoos are supposed to help us remember to all be strong, and all be creative. There are ways to get through our struggles and having the help of someone doesn’t make us weak. It makes us strong.

Love these tattoos, definitely getting one as part of my sleeve