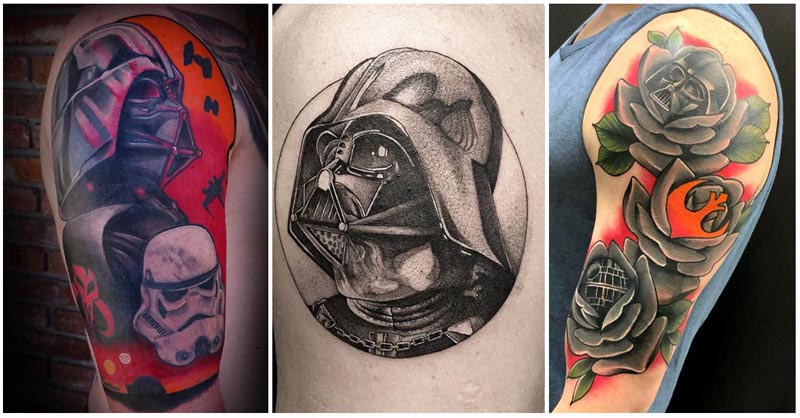 Star Wars is a movie series that has transformed lives, and is more than than to those who follow it. There is a passion that lives within Star Wars fans that will be seen in every aspect of their lives. A collection of 3 movies are created in groups, all many many years apart. Each generation has a group of Star Wars movies that they latch onto that submerge them into the series. There are a few characters throughout the movies that every fan can associate with, and one of those is Darth Vader.

Yes, Darth Vader is technically displayed as the villain, the dark to Luke Skywalker’s light, but there is more to his story.

It’s his story that adds to the complexity that George Lucas was trying to convey. Light vs. Dark, and Good vs. Evil is a battle that will always rage on. But what Darth Vader shows is that sometimes, in the light, you may do something evil to help the ones you love. His story is much more than just that of someone evil. He sacrificed himself so that his loved ones could live.

On this person’s calf is a big, bold and descriptive tattoo of Darth Vader’s mask, with black and red coloring. While the mask never changes, you can see the danger and power in his face. The red and black are the colors of danger, colors fit for Darth Vader.

This is one of the most vividly detailed and unique tattoos that you will see. Darth Vader and Princess Leia are separated by a light saber. The battle between Leia and Darth Vader prolongs the battle of good and evil, even though Luke is the one fighting.

Darth Vader’s mask tattoos are usually depicted in full black, but this is different. It is not filled in, but left unfilled and only an outline. This calf tattoo pays respect to one of the most powerful Star Wars character.

The lack of detail is truly detailed in a few scenarios. This is one of them. The combination of the red and black with the blurry Darth Vader mask makes this stand out.

Darth Vader dies in Star Wars, and this flower is in respect to Darth Vader’s passing. Star Wars was one of the movies where the villain is respected since there is more to his story than just the evil. His death was honored here with his mask and a flower.

Darth Vader is not just represented by only a hand tattoo here, but by the tattoo, a light saber, and the woman in the picture’s mask. On the back of her hand is a portrait of Darth Vader’s mask and truly stands out. Especially when holding a lightsaber!

The Fight Against the Resistance

This is a half sleeve tattoo in honor of the fight against the Resistance. Between Darth Vader and the Storm Trooper mask, and the tie fighters, the whole Galactic army is here. In a colorful homage to the slain group, this tattoo is very detailed and truly stands out.

“I Am Your Father”

One of the strongest messages of the Star Wars saga was when Vader told Luke Skywalker he was his father. The “I am your father” line is repeated by everyone and anyone, whether or not you watch Star Wars. This “mourning” tattoo, pays great respect to the fallen Darth Vader.

This leg sleeve tattoo of Darth Vader about to enter a battle scene, in fight pose is very powerful. The use of all black ink with only the light saber red, makes it stand out. The detail in this tattoo is so descriptive, in Vader’s arm and his suit.

Darth Vader, The Death Star and the Resistance logo are all focused on this tattoo. This tattoo is in remembrance of those lost in Star Wars. Those closest to Darth Vader who have passed, his daughter Leia, himself and the Death Star are all represented in this flowery homage tattoo.

You can almost see the tears in Darth Vader’s mask’s eyes in this tattoo. The black and white picture is a representation of a respect for his passing. As we have seen in the Marvel posts of Iron Man and Captain America, many people have the tattoos of masks surrounded by flowers. This is yet another example but in a much different light!

Darth Vader met a terrible end, much like this man’s forearm tattoo represents. The mangled face and the bright colors inside of the mask show the lightsaber taking the life from Vader. While gruesome, it is a strong representation of death in Darth Vader.

A Sketch of Darth Vader

This is an interesting tattoo, which has the details in the outside loose sketches. The dark color and the details are shown in this calf tattoo which looks like he’s fading away. He lost in the battle and ultimately passed, which led to details of this tattoo coming out.

This is one of the more colorful Darth Vader tattoos that we’ll see in this post. Most have just black and white details of his mask, but not the bright blues and bright reds like we have here. This is a unique tattoo with great detail and color.

The close-up and the body

The mask and the body are both show in this tattoo. You can see both his close up and his body in the shadow below. This takes up this person’s entire calf and shows both sides of Darth Vader. The close aspect and the ominous tones he brings when seen from far away.

In respect to tattoos, childish does not mean poorly done. Tattoos that are done with bare minimum details are almost harder to do, because it has to be done that much better. This is an example with the bright colors, and the vivid interpretation of the power that he possesses.

A very detailed, un-detailed Darth Vader mask…if that makes any sense. Yes, this tattoo is very specifically designed not to be the clear cut mask, but has a lot of distractions. The crumbled and destroyed helmet gives a look into the interior of what’s going on in Darth Vader’s mask. A good, and quite good sized piece.

Darth Vader is depicted here in a child-like form, holding a balloon which is the Death Star. This is a pretty creative collection of all things Darth Vader which make for a great tattoo.

Darth Vader and Yoda are prominently displayed on this man’s thighs. The true battle between good and evil, teacher and master. Both tattoos are displayed in childish descriptions, with bright colors and looks.

Vader and the Bounty Hunter

In one specific scene in Star Wars Episode V, you can see these two faces next to each other in search for Luke Skywalker. Of the darker characters, they are simply on a hunt to find Darth Vader’s son. The bright colors of the entire tattoo sleeves make these tattoos stand out, especially Boba Fett’s mask.

Back of the hand Darth Vader

Since the most recognizable aspect of Darth Vader is his mask, it is no surprise that it is in almost all of these tattoos. The back of this hand tattoo is very dark, just like his mask. It stands out and makes this tattoo really jump out.

Darth Vader and Mickey Mouse now have the same parent company. They are all under Disney, and this combination tattoo is a great measure to see that Star Wars and Disney are now one in the same. The head of Darth Vader and the body of Mickey Mouse are a fun look in this unique tattoo.

This black and white tattoo of Vader seems normal, but it has a unique twist. The #13 on Darth Vader’s helmet is an added personal touch to this tattoo. The dripping on the bottom of his helmet where his mask ends is different than many tattoos. It’s a great touch that looks great.

Darth Vader battled good and evil, and ended his story…well we all know how…in evil. The red light saber, which he used and Luke’s blue light saber are the concept of the battle of good and evil. Here is a great version of what a Darth Vader sports team’s logo would look like!

This is an interesting tattoo, which depicts Darth Vader almost like a child. The interesting part about this tattoo though is that Darth Vader is depicted without his cloak, and you can clearly see his legs. The darkness of Vader is hard to detail, but this artist did quite well.

The Darth Vader mask is truly one of a kind, and extremely recognizable. Here is another tattoo of Darth Vader’s face boldly placed on this man’s back shoulder blade. A great, bold, dark and powerful tattoo.

This is also a different Darth Vader mask, that has a little more than meets the eye. There is a slight look into Dark Vader’s mask, which shows the insides of his mask which is the only part of him that’s alive. The detail of this tattoo is exquisite which leads to a bold tattoo.

This is one of the more unique tattoos that you will see of Darth Vader. There are very unique patterns in this tattoo that represent Darth Vader as an ancient Chinese warrior. This is a strong and vividly detailed tattoo that shows a lot to the person looking at it!

Darth Vader is a character throughout the Star Wars that is feared and maybe misunderstood. He is bold, powerful and most of all, dark. He is dark in both color and inside, but his true colors eventually show themselves. The tattoos all represent the part of Darth Vader that each person can connect with. He may have followed in the dark side, but these tattoos show there is more than meets the eye.