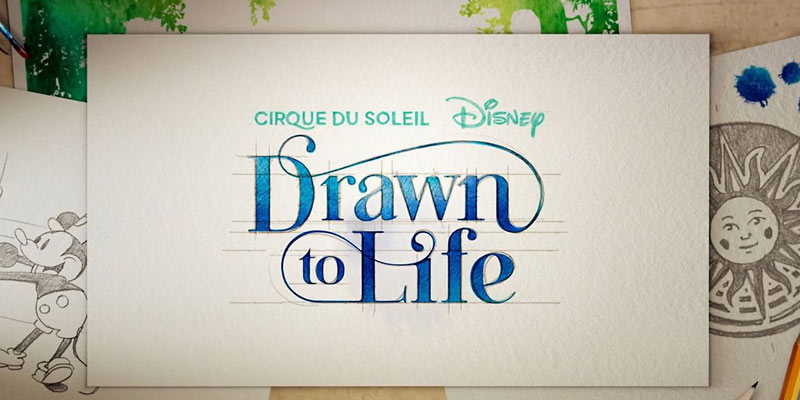 OPENING DATE: We now have an official opening date for performances. The first performance will take place November 18, 2021. (Tickets aren’t on sale yet.)

From sketch to animation, here is everything you need to know about Disney’s new Cirque du Soleil show coming soon to Disney Springs!

This page will be the most comprehensive listing of news reports, rumors, and updates about Drawn to Life, the new Disney Cirque du Soleil show.

On December 23, 1998, a brand-new show from Cirque du Soleil called La Nouba debuted at the then named “Downtown Disney” (today we call it Disney Springs) in Orlando, Florida.

Cirque du Soleil is French for ‘Circus of the Sun’ and La Nouba means ‘to live’ or ‘party it up’. It was a show that had various acrobatic performances, gymnasts, dancers, and much more in a ‘contemporary’ circus show.

This show captivated audience after audience for about 19 years until the show finally ended on December 31, 2017. Since that day, the theater that once held La Nouba has been sitting empty…until now.

On March 20, 2020, a brand-new show called Cirque du Soleil: Drawn to Life! was planned to debut at Disney Springs.

However, that opening was pushed back but it is still scheduled to happen in 2021.

With that in mind, here is everything you need to know and more about the show!

What Is Cirque du Soleil: Drawn to Life?

Drawn to Life is the name of the new Cirque du Soleil show set to debut on November 18, 2021 at Disney Springs, in Orlando, Florida.

This show will be unlike anything previously done in the history of Cirque du Soleil shows.

This is also the first time Cirque has partnered with Walt Disney Animation Studios and Walt Disney Imagineering to create a one-of-a-kind show.

Here’s what we know about the show:

Julie is a 12-year old girl, whose father (Tom) worked as an animator at Walt Disney Animation Studios.

After Tom’s death, and in the midst of Julie’s grief, she learns that, at her father’s last bequest, he hid a letter in the house that she must find.

As part of her search, she discovers an unfinished animation by her father, his last animation, that she feels compelled to complete.

According to the official Cirque du Soleil website page for Drawn to Life, the show is described as a story about:

“A courageous and determined girl who discovers an unexpected gift left by her father: an unfinished animation piece. Follow her as these few missing pages lead her into the whimsical world of animation. Guided by a surprising pencil, she embarks on an inspiring quest sprinkled with her Disney childhood memories.

Through this journey, she will learn to imagine new possibilities and animate the story of her future.”

It also goes on to say that:

“Drawn to Life draws you in an inspiring world where Disney animation can be experienced like never before.

Join us with your whole family and leap into a live acrobatic journey where our stage becomes a giant animation table. This love letter to the art of Disney animation is a celebration of life and all of its deliberate and unanticipated movements.”

If you would like to see a snippet of the rehearsals, check out this video clip:

How to Get Tickets to Drawn to Life

We still don’t have an official opening date for performances.

The first bookable performances are not yet available for 2021. When they open up, if you book tickets and the show is canceled, you’ll be refunded and given chance to re-book.

Tickets are not yet available online now or by calling (855) 473-7783, but will be soon. When the show opens, you can also purchase tickets at the venue’s box office.

Prices are expected to range from $89 to $179. Prices will be determined by seat location.

Rumors About Drawn to Life

Disney Characters…Come to Life – But How?

It is widely expected that Drawn to Life will incorporate Disney Characters into the show, both in physical or screen form.

Our traditional Disney Park character encounters are unlikely. We do not expect to see Mickey dressed up in his traditional costume to wander across the stage.

Cirque officials have talked rather about characters will be presented in “unusual ways.”

We have learned that they are using actual footage from the Walt Disney archives. Some of which has never been seen by the public.

Will we see the characters represented in some state of unfinished animation?

The Set – Clues about Donald Duck?

Early renderings of the set showed the stage to resemble an artist’s palette. We know now that it is a flat stage floor that it is built to look like an oversized animator’s drafting table.

It has been reported by those given early access that the set includes a massive pencil sharpener hanging over a bronze/beige stage. The coloring is intended to allow vividly colorful costumes to really “pop”. Holes in the floor, meant to allow sound to emerge from below, are designed to appear like duck feet.

Some performers will wear costumes that resemble paintbrushes, with the brush tip doused in vibrant colors on the head.

Cirque du Soleil is known for having live music during performances. It’s a safe bet that this Disney Cirque collaboration will incorporate live music into the show.

It’s unclear what music will be included, but it wouldn’t be a surprise if some classic Disney songs are incorporated.

Another rumor we hope to be true is that the show will utilize a new form of digital projection technology that will project images or effects onto individual performers. The intention is to make characters, drawings or sketches transform, perhaps to appear as if they are coming alive… off a canvas or paper.

This being called a new art-form, totally revolutionary. Imagine the Cinderella castle projection…only now envision a moving human. Can’t wait to see how this works!

The full guest experience will be immersive, as the waiting area, lobby and refreshment areas of the building have been completely redesigned. The new look and decor is expected to pay homage to the show’s theme and Disney animation. We can’t help but picture something akin to Animator’s Palate on Disney Cruise.

Children are expected to participate dynamically in the show in some method. Whether it is drawing with Julie before the show begins or submitting drawings that come to life (ala Animator’s Palate on Disney Cruise), Disney has some animation tricks to allow audience creations to truly be “drawn to life.”

So, how did this beautiful partnership even start? Well, before the show debuted, Downtown Disney was not Downtown Disney. It was called Walt Disney World Village. Walt Disney World Village was nowhere even remotely close to what Disney Springs is even like today. Later on, the name was changed yet again to Disney Village Marketplace. At this point in time, Disney wanted to expand Disney Village Marketplace giving guests more places to dine, shop and even things for them to do. So, in the mid 1990s, they came up with a grand plan that would re-brand the whole entertainment/dining/shopping district.

Their plan consisted of renaming Disney Village Marketplace to Downtown Disney, and expanding the shopping/dining/entertainment venue by building the Downtown Disney West Side.

With all these new additions, there was still something missing. Disney wanted to add in a major entertainment venue that guests of all ages could enjoy.

Thus, the birth of Cirque du Soleil: La Nouba was born. La Nouba became the first ever Cirque show to have a permanent freestanding structure. It was also the third non-touring Cirque du Soleil Show created.

In terms of the new ‘Drawn to Life’ show, no word has been said if they will keep to the standard of nine acts. We also do not know if the theater inside has been altered in any way to hold 1600 people. Perhaps, less people can fit inside, and perhaps they changed it so that more people could be seated. We will not know until the shows start.

The Music and Costumes of Drawn to Life

As with any Cirque du Soleil show, the costuming and music are a huge deal to the show. If you don’t have the right balance, the costuming/music could either make or break the entire show. While we do not know much if anything about the musical composition for this show, we do know that the music is being composed by Benoit Jutras. He has composed many of the soundtracks for other Cirque du Soleil shows including La Nouba. Given that Disney characters are rumored to be a part of this show, one could possibly wonder if any Disney music will be included in the show. If not, the show will at least have an original soundtrack that should be excellently reflect the nature of this show.

In terms of the costuming, the costuming is created by Philippe Guillotel. Philippe is a French visual artist who has won the César Award for Best Costume Design in 2003 and the Los Angeles Drama Critics Circle Award For Costume Design in 2012. He has designed multiple outfits for previous Cirque shows and has even designed costumes for multiple French Ballet shows. What we know so far is the costuming for Drawn to Life is very colorful and vibrant as evidenced in the main character Julie’s outfit, Mr. Pencil’s, and in the Dream of Color costumes.

When it comes to the makeup, the makeup has all been designed and crafted for each character by Eleni Uranis. She is known for working on the makeup in Cirque du Soleil: Delirium, Twitch, Midnight Sun, Cirque du Soleil Alegria: The Truth of Illusion.

While we do not fully know what makeup each of the characters will have, we do have a small glimpse as to what we could possibly expect in this concept photo:

No matter how the costumes turn out to be, how the makeup will look and how the music will sound, this show is sure to be something special once it is all put together! If this Drawn to Life is like other Cirque du Soleil shows, the costuming is sure to be pretty wacky and maybe even mystical but no matter how they look, the costuming provides the show extra flavor kind of like how salt provides flavor to food!

With the debut of Cirque du Soleil: Drawn to Life expected in fall 2021, the show is currently well underway in getting ready. Performers are already training, practicing and more to get ready for this brand-new show.

The show is sure to be quite popular so if you are planning on taking a trip down to the Walt Disney World Resort any time soon, keep your eye on ticket availability to grab your tickets to this one-of-a-kind show well ahead in advance!

Cirque du Soleil shows are really awesome, so if you have never seen a Cirque show before, now more than ever might be the right time for you to treat yourself, your friends, and even family members to a world-class show that is put on by Walt Disney Imagineering, Cirque du Soleil and even Walt Disney Animation Studios!

And hey, even if you have seen a Cirque du Soleil show you still are not going to want to miss this show simply because of how unique, how original and how intriguing this show is set to be.