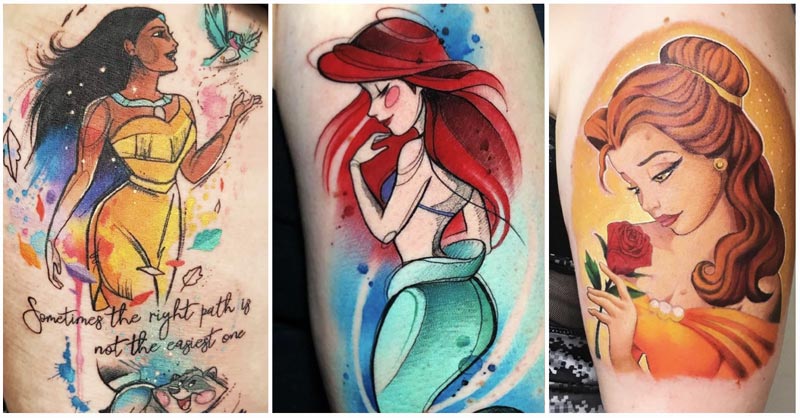 Disney princesses are the themes of some of the most popular Disney tattoos. Enjoy this collection of Disney princess tattoo ideas and designs for your inspiration.

Are you looking for a way to remind yourself to dream big and chase your dreams? Do you like to express yourself and display your interests in unique ways? Are you looking for a fun way to show off your love of Disney and its characters? Then getting a tattoo of your favorite Disney princess might be the perfect solution!

For starters, getting a tattoo of your favorite Disney princess can help you stay motivated. Whether you’re chasing the dream of being an artist or just trying to save up enough money to take a vacation somewhere new with your friends, having a reminder on your body of what you’re working toward can help keep you focused and dedicated. Plus, having a visible reminder is usually more effective than relying on something as fleeting as memory.

Another reason why getting a tattoo of your favorite Disney princess might be right for you is that it’s one of the best ways to express yourself and show off what matters most to you. Think about it: besides clothing, tattoos are probably the easiest way to tell someone that you love Disney without having to say anything at all. And if the person who sees the tattoo happens to be into Disney too, then that’s an instant conversation starter!

Belle is an independent thinker who’s not afraid to venture outside her comfort zone to find adventure. But she also loves her family, and will do almost anything to save them—even if it means being forced to live in a castle with a scary beast who turns out to be pretty okay once you get to know him.

The Little Mermaid has been beloved by children of all ages since its release in 1989, with many young girls identifying closely with Ariel’s struggles to take control of her own life and destiny. Getting a tattoo of Ariel is a great way to honor this timeless Disney princess while expressing your childhood nostalgia for the film.

Pocahontas is one of the most beloved Disney princesses because of her adventurous spirit. She loves to explore and try new things, which makes her a perfect representation of your own inner explorer.

Moana is the perfect character for an incredible tattoo! This Disney princess has beauty and brains, not to mention is kind and compassionate to everyone she encounters. Your Moana tattoo will be an extension of who you are—and who you want to be!

Believe it or not, Tinkerbell is one of the most popular characters to get inked. This feisty fairy is an important part of the Peter Pan story. She’s been around since Disney released the classic film in 1953 and has been a favorite of many young girls ever since.

Mulan is a character from the Disney movie Mulan. She is the daughter of the legendary warrior Fa Zhou, who was forced to raise her as a son due to a law requiring all male heirs to serve in the military. When Mulan’s father falls ill, she impersonates him and goes on his place, taking her father’s sword with her.

Princess Jasmine is the heroine of the 1992 movie Aladdin. She was raised in a life of luxury and privilege but is also headstrong and independent. She is strong, independent and feisty— of course she’s such a popular princess!

Everyone knows Cinderella from her storybook adventures, but she’s become a popular tattoo theme for Disney fans as well.

A Snow White tattoo is the perfect way to show off your inner princess—it’s bold, it’s beautiful, and it’ll make you feel like royalty.

Long hair or short hair, we’ve all felt like Rapunzel, waiting and wondering for our “life to begin.”

If you’ve been “Frozen” by doubts about getting a tattoo, these Elsa inspirations will help you to “Let it Go!”

The diligent, faithful and hard-working Tiana fights to make her dreams come true. And so can you.