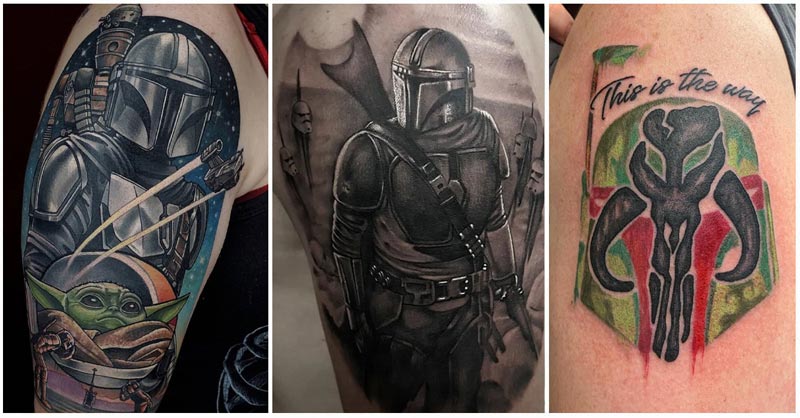 The Mandalorian has fast become the most popular theme for Star Wars tattoos.

Released specifically onto Disney’s new streaming service, Disney+, the Mandalorian caught fire and was a huge success to Star Wars fans. Even without even a mention of Darth Vader, the series brings a very distinct Star Wars feel to the television show front. Heck, it was even loved by people that never watched a single movie. It also brought us one of the most popular memes…baby Yoda!

The Mandalorian follows the story of a bounty hunter who is part of the most skilled group in the galaxy. In order to be who he is, he had to give up his identity in order to do his job properly. He is the best of the best, and following his story from hired bounty hunter to protector the Mandalorian has a little bit of something for everyone.

This collection of tattoos describes the strength and power that the Mandalorian possesses. It also consists of one of the cutest and most popular characters that Star Wars has ever created! Enjoy!

Since his name is hidden, we’ll call him what he calls himself, Mando. This tattoo shows the care Mando had for the “package” that was supposed to be given to the New Republic. Instead, he became his protector. This is a cool tattoo representing their relationship.

Not being a spoiler, but if you watched the Mandalorian you would know that Mando was never allowed to take off his helmet. He did at the end of the 1st season, which is why this tattoo makes a lot of sense. It is an interesting respect to the fact that the helmet is now retired and you can see Mando’s face.

The mythosaur was the creature that gave the Mandalorian their special powers. This is a tattoo that Boba Fett wore, since he is one of the most known of the Mandalorian. The power and strength it stands for is very obvious. It is one intimidating tattoo!

Mando’s task was to find the “package” that we would later learn is baby Yoda. This tattoo is a scene from the movie where he finds him, and strictly points at him. The large portrait of baby Yoda’s face is right above the scene, adding in one of the most recognizable characters of the series.

This is one fearsome Mandalorian mask. It has serpentine pattern running through the outside of the mask, with the Mythosaur logo on the top. The darkness of the ink makes this tattoo one to remember.

This tattoo has a little bit of everything. It has the edginess of the helmet, along with the cartoonish feeling blaster. The helmet is detailed and intimidating and the blaster is too, but in a different way. This is a very colorful Mandalorian tattoo.

The bland detail here, just using silhouette colors makes this a unique tattoo. The Mandalorian is shown here as all black, with the gold shining reflecting sunlight. It is a great piece that shows just enough detail, while hiding most of it.

The Bones of the Mythosaur

This is a much different depiction of the Mythosaur than most tattoos we will see. The clear descriptive bones in the skeleton of the Mythosaur is in this tattoo. Many tattoos only feature it as filled in completely or just simply dark, but this is a much different example. It is a truly scary example that makes anyone looking at it be intimidated!

All major aspects of the Mandalorian’s series is portrayed here. This is a truly magnificent tattoo that has the color, it has the detail and it has the whole aspect of the show. The green on baby Yoda’s face, along with the very detailed Mando and the whole scene is astonishing work!

Baby Yoda hiding behind the mask

This tattoo is a nice tribute to Mando and Baby Yoda. It has Mando’s helmet, sleekly designed and Baby Yoda holding on looking out from behind like he’s being protected. Mando decided to protect Yoda and not turn him over, and this is a respectful design to that.

This is an interesting piece, because it combines the most famous Mandalorian with the mythical beast. The Mythosaur is front and center, prominent and dark while you see Boba Fett’s helmet in the background. The detail of the background is loose which puts all of the focus on the Mythosaur. This is an extremely well thought out and planned tattoo.

The Mythosaur describes strength and the symbol just oozes with power. Many people choose to tattoo the skull because it has a more frightening appearance. This one specifically has the look of more decay on the bones and is extremely frightening…I’m sure that was this person’s plan!

So, as we can see, this tattoo is half way there. It has the colorful detail and all the elements except for the bottom half. This piece is done in a slightly more cartoonish way, which adds to the look of it in my opinion!

As far as intimidating and detail tattoos go, this is one of the best. The detail that went into making this black and white tattoo a masterpiece is amazing. The shading and color contrast of Mando’s body is absolutely incredible.

This is the Way Memoriam

This tattoo is bright and vivid with really red color. The slogan of the Mandalorian is done nicely at the top and bottom of the mask and flowers, which makes the mask of this tattoo the focus.

This has a very personal twist to the Mandalorian, having Mando surrounded by a heart. The heart, which is obviously meant to symbolize something for this person has the word “Daddy” written along the bottom. I’m not going to speculate, but this is a wonderful tattoo with a lot of personal meaning.

Most of the time Boba Fett’s mask is portrayed, it is with color on the mask, and no darkness inside. This silhouette version shows a very simple black and white design without the color and just the flowers. It is a simple design which looks sleek and interesting.

Mando in the desert

This is a very common theme from the Mandalorian when thinking about Mando. The strength and the aura surrounding him while he’s on his walk in the blistering sun, with baby Yoda shows much of his character. The detail in this tattoo capturing the brown of his vest and how the light reflects off of his helmet is very impressive.

Much like the tattoo above, I mentioned that Mando’s walk through the desert was iconic. This is a different take on the scene, since it is all silhouetted. The only detail is in the shape of the objects, and not in each thing individually. The sunset and the rocks are bright and colorful which makes it really easy to make out the entire scene with all of the characters. Color makes this tattoo come alive.

This is one of the more Mythosaur tattoos that you will find. It has the design, but it is very different. This person has used fake broken and cracked skin to show the design on the Mythosaur as in this person’s body. The Mythosaur lives within him!

A memorable scene from the show is Mando walking through the desert with baby Yoda. This person (I’m going to guess arms but I’m not sure…) had this recreated on his body across two of his arms to make the scene full. It is a bright, colorful and truly a stand out tattoo.

Mando’s Mask and the Mythosaur Symbol

While it’s very faint, you can see the Mythosaur emblem in red on the outside of Mando’s mask. This tattoo has a lot of red to make the logo not necessarily stand out, but is definitely there. It almost looks like spray paint.

This is the Way

This half sleeve tattoo is filled with just about everything. It has the bright color, it has the slogan and it has the detail that make this a masterpiece. Taking up this man’s entire forearm this is a great new addition.

The mythosaur logo here is a strong black filled in tattoo that takes up this man’s entire bicep. Many people have different ways of using the mythosaur, design-wise. I personally like this the best, of the completely filled in black symbol.

This inside wrist tattoo is a simple black Mythosaur but it’s everything else that adds to this tattoo. The key chain and the lightsaber are a nice touch to make this tattoo match everything this person likes!

Mando is tattooed here ready to fire his blaster. The diamond scene with color, while having the character coming out of the diamond is a nice perspective look. The body is all black and white, silhouetted and detailed to be slightly more basic, but still detailed at the same time. This is a very difficult thing to pull off, and have it look this good!

This sketched tattoo features strong detail in lacking detail. None of the colors are filled in and just made through lines. The artist made it a point to use a lot of detail to make sure this tattoo looks like it lacks it. This is a great tattoo!

Boba Fett is considered one of the strongest of the Mandalorian, and there’s no argument why he’s always represented within tattoos. This new series is a great addition to the franchise, and brings this tattoo to life. The color and detail of the scuffed up helmet is one of a kind, and something you’ll never forget you have.

This is a solid tattoo on this person’s calf of Mando’s mask, seeing just a portrait version of him. You can notice the purple lines and design underneath which means there is more to come from this piece. The gold behind the helmet really makes his mask stand out.

In almost every post that we have done there has been a child-like tattoo. They never disappoint and are always an interesting twist on how you see the character. The detail and color in the tattoo make it stand out on this person’s body.

This is the way

The Mandalorian are a very secretive group. Not many people know who they really are, and they are extremely hidden behind their masks. They are not allowed to remove them and that makes their masks their identity. You can see throughout this entire post the different takes on what people love about the Mandalorian. It could be the strength of the mask or what they’re willing to do. As we all know the highlight of the Mandalorian series on Disney+, baby Yoda (who really isn’t baby Yoda) was the height of the series. A lot of the tattoos have him included, and that makes each one unique and special. This was a great collection of tattoos each with something standing out to each person.