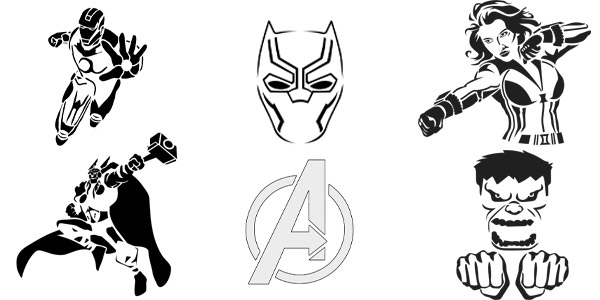 This is the largest round-up of Marvel pumpkin stencils for you to choose from.

How to Use a Template to Make a Marvel Pumpkin Carving

Here are some basic guidelines to get you started carving a Marvel pumpkin stencil.

For fans of superheroes like The Avengers, it’s the best time of year to use a Marvel pumpkin stencil.

Take your pick with the following Marvel pumpkin carving ideas we share below:

Enjoy these Marvel links that we have curated from around the web for your enjoyment. For personal use only.

The Incredible Hulk Stencil – Angry Hulk might be a perfect look for your pumpkin this year.

The Black Widow Stencil – The real name of Black Widow is Natalia Alianovna Romanoff and she is a founding member of the Avengers. Also a master assassin and spy born in 1984 in what was then the Soviet Union’s Stalingrad.

Baby Groot Stencil – The cutest little guy in the Marvel universe, this member of the Guardians of the Galaxy will be adorable on your pumpkin.

Captain America Shield Stencil – Iconic…everyone will recognize this symbol of justice and patriotism.

Ant-Man Stencil – No need to shrink away from this one. You can do this stencil nice and big.

Avengers Logo Stencil – Can’t pick a favorite Avenger but don’t have time to carve them all? Try their emblem!

Captain America Full Body Stencil – Get the full uniform of the First Avenger for your pumpkin carving.

Captain Marvel Emblem Stencil – Higher, faster, better, baby. That’s what you get with Captain Marvel’s icon on your pumpkin.

Hulk Angry Face Simple Stencil – This angry Hulk face is sure to shock your trick-or-treaters.

Hulk Angry Face with Fists Stencil – Similar to the above design but with added fists.

Hulk Angry Face Detailed Stencil – If you’re looking for something challenging to carve, try this.

Iron Man Face Stencil – The mask of the original Avenger.

Iron Man Hand Blaster Stencil – Okay, this one is cool.

Thor Flying Full Body Stencil – A stencil of the God of Thunder in action.

Thor with Mjolnir Hammer Body Stencil –  A silhouette design of Thor with his mid-length hair.

Guardians of the Galaxy Baby Groot Body – Silhouetted in a circle is this happy baby Groot.

Guardians of the Galaxy Baby Groot Stencil – It’s a happy dancing Groot in a pot. And it comes with instructions.

Guardians of the Galaxy Drax Face – Nothing goes over this Drax head pumpkin stencil.

Guardians of the Galaxy Gamora Face – The face of the warrior assassin Gamora.

Guardians of the Galaxy Rocket Face –  Ain’t no thing like a detailed silhouette of Rocket’s face.

Guardians of the Galaxy Starlord Face – A simple design of Peter Quill’s mask.

The Scarlet Witch Stencil – Wanda Maximoff on your Halloween pumpkin? Doesn’t take Wandavision to see this is a great idea.

Spiderman Detailed Waist Up Stencil – A advanced design of the spidey suit.

Spiderman Logo Stencil  – For those who love Spiderman, but not his detailed costume for carving.

Spiderman Logo with Web Stencil – Similar to the logo above but with a little more web flourish.

Wolverine Stencil – Helmet and claws with this Logan stencil.

Thanos Stencil – The evil overlord of the Avengers-fame, Thanos, is an Eternal–Deviant tyrant from the moon Titan, and he’s ready to SCARE all your visitors this year.

Hela Stencil – The wicked goddess from Thor Ragnarok is only for the truest of Marvel fans.

Thanos Profile Stencil – A side view of the wearer of the Infinity Gauntlet.