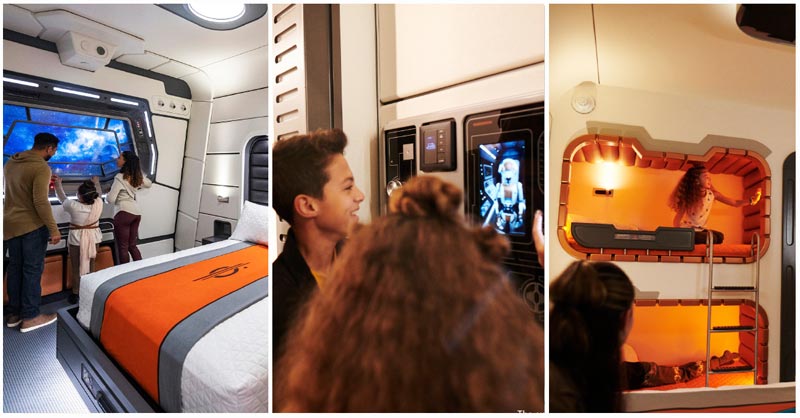 Wondering what it’s like to stay in one of the new Star Wars hotel rooms? Read on to learn about each room type on the Star Wars: Galactic Starcruiser.

A long time ago, in a galaxy far, far away…

Want to save this article? Enter your email below and we'll send it straight to your inbox!

We waited ages for it, and the Star Wars: Galactic Starcruiser finally arrived in March 2022.

A two-night all-inclusive adventure, staying at Disney’s Star Wars hotel is more than what we expected. It almost makes it worth the sticker shock when you see the starting prices.

There are 100 guest rooms on the “ship”…which type is right for your family?

Let’s describe each type of room.

Before we get into the rooms on the Galactic Starcruiser, here’s some starting info:

Think about a Galactic Starcruiser vacation package like a two-night cruise, including a park day excursion.

That’s essentially what you’re paying for here – much more than just booking Star Wars themed hotel rooms, although we won’t pretend that the prices aren’t still steep for two days.

With that taken care of, let us embark on our journey through the rooms on the Star Wars: Galactic Starcruiser!

Table of Contents – Rooms Aboard the Galactic Starcruiser

When you first walk into your cabin, you’ll feel the Star Wars hotel vibes right away.

These cabins are reminiscent of cabins on Disney Cruise Line ships, with a distinctive Galactic Starcruiser look for the rooms.

A combination of gray, silver, and white have that clean space style, with pops of orange for color. Copper elements also serve as an accent tone to set off the orange.

To one side is a small closet and long lighted mirror, and on the other side a pocket door encloses the bathroom space.

In the bathroom, you have the sink and shower in one area and the toilet in another, again separated by a pocket door.

The mirror above the sink is lighted, with hand soap and lotion mounted on the wall and storage under the sink.

If you’re someone who needs a hair dryer, the thermal dryer is in a box under the sink.

The shower is long and narrow and is only a stand-up (no tub combo). There’s a fabulous rain showerhead, and a thin shower wand if you like to have an additional spray.

The frosted glass door of the shower slides shut which mimics the style of the pocket doors. A long mirror in the same space as the toilet completes the bathroom area.

Moving into the living and sleeping spaces, you have a closet with shelves and hanging areas, as well as your small safe.

On the bottom shelf is the Cooling Supply Unit (mini-fridge) which is great for bringing your own snacks or small cold items.

When you’re landing in Galaxy’s Edge, it’s always a good idea to bring cold water or other snacks from your Galactic Starcruiser rooms in case it’s a hot day in Batuu.

In the hanging part of the closet there are two Chandrilan Star Line robes for use during your stay in the Galactic Starcruiser rooms – just remember if you try to stow them away, you’ll be charged the galactic credits.

On the one wall is the phone and D3-09, your on-board droid companion, as well as the inset TV.

On the opposite side from the TV is the queen-sized bed with cool built-in nightstands and lights that come out from the wall. Unlike some of the newer Disney resorts, these beds don’t have storage underneath, but there’s plenty of room in the corner to stack suitcases.

To the one side of the beds are the built-in bunks, which can fit an adult. However, we know it is more likely you’ll be using these for the kids.

A post shared by KAT by Melissa Pearson (@katbymelissapearson)

The bunks also have pull-out lights from the wall, which is nice for your little readers.

On the opposite wall are small rollout storage cubbies as well as your view of space out your window.

Each of the Galactic Starcruiser rooms has an everchanging panorama of what is happening in the galaxy, as well as a first look at the planet Batuu as you land at Black Spire Outpost.

Watch this short video tour of the Standard Cabin here:

When you first enter the Galaxy Class Suite, you’ll immediately be blown away by all the extra space. The word suite is not used lightly here!

Disney definitely continues to bring the quality in the larger rooms of their Star Wars hotel.

Galaxy Class Suites open into a wet bar and seating space, complete with a sink and mini-fridge.

You also have more storage in this space, ideal for keeping your own dry snacks and cold items.

You won’t be able to heat up anything, as there isn’t a microwave, so just plan to bring packaged snacks rather than frozen meals. However, this space is nice for feeding your family in the morning with the bar stools and table.

In this entry space you also have a vanity with stool and lighted mirror, as well as the same closet space seen in the smaller Galactic Starcruiser rooms.

The closet has an extra set of bedding and a pillow, which you can use for the pull-down bed located in the living room.

As you move into the living room, there’s a large couch that can certainly seat everyone in your party.

An inset TV rests in the wall, which defaults to your journey through your Star Wars hotel itinerary. Again, this will feel common to Disney Cruise guests, as the TVs on the ship do the same. Even in your Galactic Starcruiser rooms, you have a bit of Earthly familiarity.

The living room also is the location of one of the pull-down beds.

Much like we’ve seen at the newer DVC resorts such as Riviera Resort, the pull-down bed rests under the TV and is like a little nook in the wall. During the day, the bed folds up, making more room for everyone. There’s space within the end tables of the couch as well as the closet for the belongings of the person sleeping in the living room.

Completing the living room is a window looking out into the galaxy, your perfect view throughout your voyage.

One of the best parts of these Galactic Starcruiser rooms is the separate bedroom.

This bedroom is much like the sleeping space in the Standard Cabin, with a queen-sized bed as the focal point.

The main difference is that instead of bunks, there’s another pull-down bed under the inset TV. Another cool feature is a hidden tunnel that connects the bedroom to the living room via a small sliding door – you’ll really feel like you’re in the Resistance!

The bedroom also has its own closet space and D3-09 panel, which means you don’t have to leave your room to access the phone or your itinerary information.

A pocket door separates the bedroom from a small hallway which runs through the suite, and the bathroom is right across the hall.

The bathroom has much the same setup as in the Standard Cabin, except there is a double sink rather than a single. We really like this feature, as it allows multiple people to get ready at the same time.

Again, there is only a shower, so if you’re traveling with younger kids you may want to make use of the wand to help them rinse.

Check out a brief video tour of the Galaxy Suite here:

This is the largest of the Galactic Starcruiser rooms, and ideal if you’re travelling with a large party.

In many instances with Disney, it’s more cost effective to reserve multiple rooms rather than booking one of the larger suites.

However, in this case, it might prove less expensive if you’re filling the room.

That means putting eight people all in the suite – four in one bedroom, three in the second, and one person in the living room. It might seem like a tight squeeze, but it is just for two nights.

The Grand Captain Suite appears as if you took the other two Galactic Starcruiser rooms and merged them into one.

The entrance and living room are the same as the Galaxy Class, including the closet and sink spaces. Oh, and don’t forget the secret tunnel from the living room to the first bedroom!

In the first bedroom, you have a queen bed and a pulldown bed under the TV, much like in the Galaxy Class.

Across the hallway is the first of the two bathrooms, again exactly like the Galaxy Class. This is one of the aspects that preserves the Galactic Starcruiser vibes of these Star Wars hotel rooms – they are consistent. Much like fictional space cruisers, the compartments mimic one another.

Moving into the second bedroom, this one is like the Standard Cabin, with the queen bed in the center and the bunk beds inset into the walls.

The second bathroom connects to this bedroom, with the smaller setup of the Standard Cabin bathroom. When you’ve got eight people all in one cabin, you’ll be glad for this second bathroom!

Watch this video tour of the Grand Captain Suite: (Note: get a view of an ADA compliant bathroom with this walkthrough)

This Star Wars Hotel rooms guide walks you through each class of cabin aboard the Galactic Starcruiser:

Get ready to take off on the adventure of a lifetime in your Galactic Starcruiser room.

Which cabin seems right for your family? Let us know in the comments.

Grace is a life-long lover of all things Disney, particularly the parks at Walt Disney World. She is also an avid Disney Cruise Line enthusiast who regularly dreams of the white sands of Castaway Cay. Grace loves the fact that her Disney trips give her time to spend with her family, enjoy incredible food, and try new experiences.