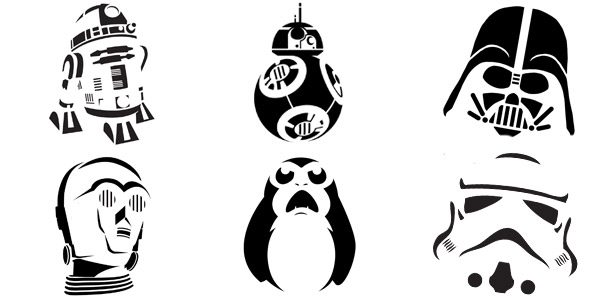 This is the largest round-up of Star Wars pumpkin stencils for you to choose from.

Here are some basic guidelines to get you started carving a Star Wars pumpkin stencil.

For fans of The Force, it’s the best time of year to use a Star Wars pumpkin stencil.

Take your pick with the following Star Wars pumpkin carving ideas we share below:

Enjoy these Star Wars links that we have curated from around the web for your enjoyment. For personal use only.

A long time ago in a galaxy far, far away… people started searching for Star Wars pumpkin carving ideas. Whether you like the original trilogy, the prequels, the new generation series, or a subseries, there’s something here for you.

Ewok Stencil – Cuddly or creepy? You decide what you think of this detailed Ewok face.

Emperor Palpatine Face Stencil – Search your feelings, you know you want to carve the Emperor’s face.

Galactic Empire Emblem Stencil – Show which side you’re with on your pumpkin.

Poe Dameron Resistance Helmet – Commander of the Republic Fleet…that is no more. 🙁

Jabba the Hutt Face Stencil – The galaxy’s most powerful blob from Tatooine.

Jakku Star Destroyer in Sand Stencil – The site where Rey digs for parts to get portions.

Jedi Order Emblem Stencil – The signia for those who wield the force.

Maz Kanata Face Stencil – A simple design of the Pirate Queen of Takodana.

Rebel Alliance Emblem Stencil – Show your side on your pumpkin.

Darth Vader Simple Mask Stencil – Be careful not to choke on the pumpkin seeds you cook from this pumpkin.

Darth Vader’s Burned Helmet Stencil – You’ll be able to finish what you started with this pumpkin carving.

Darth Vader in Death Star Stencil – If you want more Vader than just his helmet, this is perfect.

Young Anakin Face Stencil – The face of the only human pod racer.

Chewbacca Simple Scary Face – Something scared Chewbacca in this stencil of his head!

Chewbacca Detailed Face Stencil – The Wookiee might pull somebody’s arms out of their sockets in this design.

Captain Phasma Upper Body Stencil – A side profile of the lady stormtrooper captain.

Yoda Detailed Side Face Stencil – Do or do not, there is no try with this pumpkin template.

Porg Body Happy Stencil – A stencil of the loveable penguin bird from Ahch-to.

Porg Body Shocked Stencil – The look on the bird’s face when Chewie goes into hyperdrive.

Darth Maul Spikes Stencil – Just his scalp, no face. That makes this a more tackable project.

Darth Maul Detailed Face Stencil –  This full-headed stencil is not for the faint of heart.

Darth Maul Simpler Face Stencil – He appears to be hooded in this design.

C3PO Face Stencil – I suggest a new strategy for this carving: bring smaller knives for the details.

Rey Face Stencil – Rey’s face and helmet back on Jakku.

Rey on Jakku Speeder stencil – Rey scavenging for parts on her speeder.

Rey with Bowstaff Silhouette Stencil – A shadow of the fiery Jakku orphan.

Rogue One Cassian Face Stencil – The captain from the rebel alliance on a deadly mission.

Rogue One Jyn Erso Face Stencil – The key to finding the Death Star’s plans for the rebel alliance.

Rogue One K-2SO Face Stencil  – The sarcastic, pessimistic droid from the Rogue One mission.

Finn Face Stencil – You won’t need the force to figure out this simple Finn face stencil.

Finn with Saber Stencil – Come and get the template of Finn wielding Luke’s lightsaber.

Kylo Ren Face Stencil – Show the darkness of the force by designing Kylo’s helmet on your pumpkin.

Kylo Ren with Saber Stencil – Fulfill your destiny with this stencil.

When did the tradition of carving pumpkins begin?

The tradition of carving pumpkins to make jack-o-lanterns is believed to have originated in Ireland. In the 1800’s, gourds of many kinds were hollowed and carved with grotesque faces. Jack O’ Lanterns were believed to scare away evil spirits. In 1835, the legend of “Jack-o’-the-Latern” was published in Dublin on Halloween.

When should you carve pumpkins?

Carved pumpkins don’t last long, so it is best to wait as close to Halloween as possible. Three days before Halloween is a good timeframe to aim for.

What should you do with old pumpkins after Halloween?

Since pumpkins are organic, you can safely add to your compost bin.