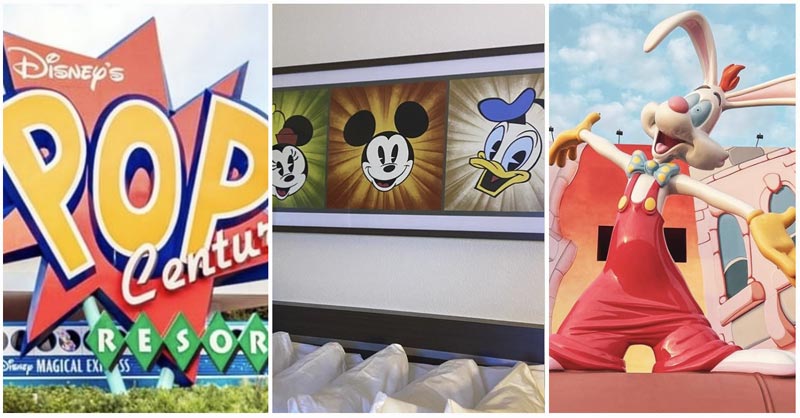 Opened in 2003, the rooms at Disney Pop Century resort followed with the style of the time, fitting with its name. During the early 2000s, room style and décor focused on a darker color palette, especially in the furnishings. There was the trend of an accent wall in the room – usually a dark color – that went with some of the other decoration elements.

In the same style, the old Disney Pop Century rooms had dark carpet (with hidden Mickeys!), a dark blue accent wall, and thick comforters bedecked with Disney characters. Beyond these Disney touches, there wasn’t much to set apart the rooms at Pop Century from a typical hotel room.

In 2017, Pop Century went through a reimagining, and the refurbished rooms wowed the guests that stayed there. The updates show off a more modern style and conveniences, as well as providing extra layer of privacy between the sections of the room. Instead of the dark, somewhat dated look of the old rooms, the new style is light, bright, and clean. Wood floors and accents complement the sleek white walls, while the bright Mickey Mouse décor has a pop art look the reflects the theme of the resort.

One of the major changes is converting one of the queen beds into a pull-down Murphy bed, that Disney calls a table bed.

This adjustment is perfect for a few reasons. One, if you’re just staying as a couple or flying solo, it gets that extra bed out of the way. This frees up more space in the room. Two, if you need to use that bed, you can still get the bed out of the way when you’re not using it. When you have four people in one smaller room, take all the extra space you can get! Finally, having the table bed allows the beds to be closer together, since it isn’t always there. Yes, it’s a bit tight at night, but if you’re sleeping does it really matter? During the day, just scoot the bed up and out of the way!

We’re huge fans of this refit, and we can’t wait to show you more of the rooms at Disney Pop Century resort!

It is important to note that all the rooms are the same (except for the handicap accessible rooms). Each room is about 260 square feet, including either one king bed or a queen and a table bed.

The rooms also all have the same basic amenities:

The coffee maker and mini-fridge are both new with the renovation, put onto a cart along with a few other items. While you don’t have a microwave to heat food, it’s nice to have the option to keep items like milk, yogurt, or other snacks cold. Also with the refit, they added several new outlets and USB ports for charging your devices. There are also now multiple new storage options, including cubbies built into the nightstands.

One of the biggest changes, aside from the table bed, is the door between the bathroom and the rest of the room. It used to just be a thin privacy curtain, which you could pull shut when you were in the bathroom space. Now, a thick pocket door separates the two areas. This door helps to block both light and sound, ideal if you are getting up before the rest of your party or using the bathroom in the middle of the night. A pocket door also separates the sink from the shower and toilet, maximizing the space of the smaller area.

The rooms now have more storage with a dresser under the flat-screen TV, knobs for hanging jackets and ponchos, and a small closet in the bathroom area.

At Disney Pop Century, the rooms fall into two categories – standard and preferred. Since all the rooms are the same, the location within the resort sets the categories apart. Preferred rooms give you the benefit of being closer to central areas like Classical Hall, which houses the dining and shopping, and your transportation options.

The most common question we get is Are preferred rooms worth it? Well, it really depends on your vacation priorities and whether you have your own means of transportation. If you have your own car, no, it’s probably not worth it. Yes, you might save time walking to Everything POP for food, but if you have to walk back past your room to get to your vehicle, are you saving the steps?

Standard rooms are the same layout and size as preferred; they are just a bit further to the outside of the resort complex. Again, this isn’t a bad thing if you drove yourself. You might actually be closer to your car in a standard room!

Similar to the categories, rooms at Disney Pop Century have two views – standard and pool. As the name suggests, pool rooms look out over one of the three pools at the resort. Meanwhile, standard view rooms have a lake view, a garden view, or look out over the parking lots.

For starters, since Pop Century has exterior hallways, the view isn’t so much about what you see. It isn’t like you have a balcony or anything – the windows look out to the walkway and the door opens onto the same space. Again, this distinction is about your placement in the resort. A pool view room will put you closer to the pools, while a standard view room will be further away.

Once more, making this choice is about your priorities. If you plan to spend a lot of time at the pool, then you might want to invest in a pool view room. These rooms are on the inside parts of the 50s, 60s, 80s, and 90s buildings. However, if you don’t really care about the pools, save the money and go for standard.

With the different views and categories of rooms, you can basically choose your location within the resort. Again, you just need to think about what you want out of your stay.

These rooms are in all the sections of the resort, and tend to be the least expensive. It is likely you’ll be on the outside of the room block, facing the parking lot, landscape, or the lake. You also won’t have a clear view right outside your room – the large characters and pop culture icons may be blocking the way.

If you’re trying to save money, these rooms are the way to go. You might have to walk a bit, but if you’re alright with that, then it’s not an issue. Again, if you have your own car, you might prefer these rooms because of their proximity to the parking lot.

If you want a pool room but don’t care about preferred, this is your choice. These rooms will be in the 1980s/90s section, looking out over the Computer Pool, or in the 1950s with views of the Bowling Pool. You’re a little ways from Classical Hall, but close to the respective parking lots. The 1950s also have the benefit of being close to the Disney Skyliner station and the bridge to Disney’s Art of Animation.

For those that drove themselves but still want prime pool access, this is your best bet. You’ll be close to your car, but with the pool right out front of your room.

You’ll find these rooms in the 70s, 60s, and 50s sections of Disney Pop Century resort. Centrally located, but with views of the resort or the lake rather than the pool. In the 1970s section, the center rooms have garden views and look out to the playground, as it doesn’t have a pool. For the other two sections, your preferred room will be on the outside parts of the buildings.

These rooms are great if you want to be close to the hub of the resort, but don’t really need pool access. Again, preferred rooms are worth it if you’re going to be eating at Everything POP every day or using Disney transportation. Being on the standard view side can be quieter as well, since you won’t be right up against the pool.

The most expensive combination, preferred pool rooms are primarily in the 1960s section looking out over the Hippy Dippy pool. These rooms are smack in the middle of the resort, with views of the largest pool complex at the resort. The Hippy Dippy pool isn’t just a fun pool, with showers and cool flower theme, but this is also where you’ll find the kiddie pool. You’ll also find Petals Pool Bar here, something neither of the other pools have.

For families with younger kids, you might want to spring for this room combination, especially if you have little swimmers. These rooms will keep you from having to walk super far, whether you are going for something to eat or catching the bus. You’re also not that far from the playground in the 70s section, which can be nice if you just want to let your kiddos run around.

At the end of the day, you have to decide what works best for your family. No matter what room you choose, you’re going to love your stay at Disney Pop Century resort!

Does Pop Century Resort have Suites?

Suites are not available at Pop Century. In fact, each of the hotel’s rooms is virtually identical. If your family wants to stay in a suite at a Disney value resort , they’ll have to stay at Art of Animation or All-Star Music.

How big is a Standard Room at Pop Century?

At Disney’s Pop Century, standard guest rooms measure 260 square feet and include either a queen bed plus a queen pull-down bed, or a king bed. Preferred rooms are located closer to Classic Hall and cost an additional fee.

What rooms at Pop Century are closest to the Skyliner?

How long does the Skyliner take from Pop Century to Hollywood Studios?

If you are staying at one of the resorts, plan to walk a total of 5 to 10 minutes to the station. If you are rope-dropping, be prepared to speed-walk.

It takes approximately 10 minutes to get to Hollywood Studios from Pop Century via Skyliner.

It will take approximately 18 minutes to travel via Skyliner to EPCOT from Pop Century.

Grace is a life-long lover of all things Disney, particularly the parks at Walt Disney World. She is also an avid Disney Cruise Line enthusiast who regularly dreams of the white sands of Castaway Cay. Grace loves the fact that her Disney trips give her time to spend with her family, enjoy incredible food, and try new experiences.