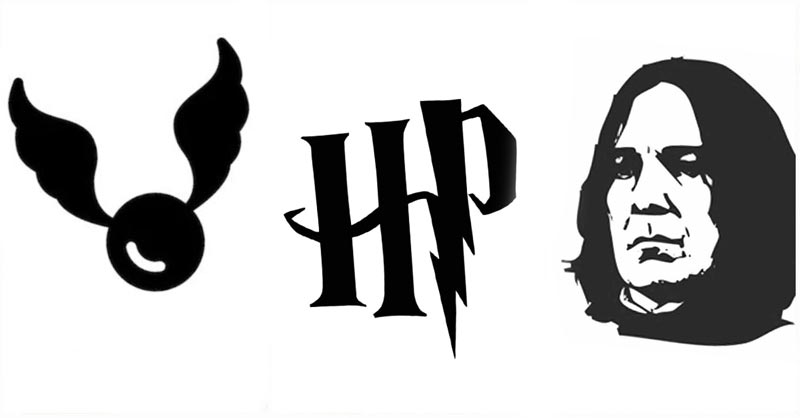 Harry Potter pumpkin stencils are very popular! If you like these, you might also enjoy Disney stencils, Marvel stencils and Star Wars Pumpkin Stencils.

We’ve rounded up a huge collection of the best Harry Potter pumpkin stencils!

Want to save this article? Enter your email below and we'll send it straight to your inbox!

Here you can find pumpkin carving templates for characters and icons from the mega-popular Harry Potter book and movie series from J.K. Rowling.

Harry Potter Pumpkin Stencils are the perfect way to celebrate your love of Harry Potter and pumpkins this Halloween!

Whether you’re a diehard fan or just someone who likes to have fun, Harry Potter pumpkin stencils are sure to make your jack-o’-lantern stand out from the crowd.

These stencils are designed by artists with a passion for Harry Potter and an eye for detail.

Every included Harry Potter stencil was gathered from around the web. For personal use only.

Note: We have included a variety of images in this collection, not all will serve as exact template for your Harry Potter pumpkin. Such images are here simply to inspire your creativity.

Here are some basic guidelines to get you started carving a Harry Potter pumpkin stencil.

Easy Steps to Carve a Pumpkin Using a Template

These stencils are great because they’re free to download, so there’s no need to spend any money on them. They’re easy-to-use too—just print them out, cut them out using scissors or an X-Acto knife, then stick them onto your pumpkin using tape or glue! The best part about these stencils is that they’re reusable—if you want to change up your decor next year or just want another option for this year’s display, then just use another set of stencils!

Here are some of our favorite Harry Potter stencil ideas.

We love this Harry (or should we say Hairy) outline of the boy wizard’s head. Scar, glasses, and all.

Three important icons from the book series in one template. These will be instantly recognizable by even the most casual of fans.

A bit more detailed stencil of Harry, but well worth the effort for the patient pumpkin carver.

This Hermione Granger pumpkin stencil would go great as part of a trio with Harry and Ron. The three friends hanging out together on your porch…in pumpkin form.

Goes nicely with stencils 3 and 4, this Ron Weasley pumpkin stencil rounds out the series of the three wizard friends.

Loyal house elf, Dobby deserves a place at your house, don’t you think?

Whether used for carving a pumpkin or fancy chalk art, you might want to incorporate the Golden Snitch into your decor this year.

Decorate with the vintage Harry Potter logo. Print out this stencil, paste to your pumpkin and trace it out.

Highly recognizable, these two letters put together can bring a dull pumpkin to live by creating a reaction for all those who love J.K. Rowling.

Add to your Harry Potter collection of themed stencils with one of the most beloved characters of the entire series.

Honor everyone’s favorite house elf this year by getting an image of Dobby to put to display.

13. For the True Harry Potter Fan

Naturally, there are true Harry Potter fans out there willing to spend time on a creation that will have the whole neighborhood talking. Take an image like this and make a stencil that you can use for the highly detailed work a pumpkin like this would require.

Up for a challenge? Try tracing out this Dobby house elf outline to your pumpkin of choice. It might take awhile but it will sure be impressive when you’re done.

Level up your Harry Potter theme with a dementor. Your house guests won’t know if they’ve arrived at your house or Azkaban.

Love this outline of Hogwarts castle with its majestic spires, flowing banners and mystical Quidditch hoops.

The intricate details on this stencil make it a worthy addition to this round-up of Harry Potter carving templates.

Which Hogwarts house are you? Ravenclaw? Hufflepuff? No. Slytherin? Yes, we thought maybe so!

Place the Dark Mark on your pumpkin this year to show your loyalty to Lord Voldemort.

This ultra-simple design will make Snitch carving a Cinch. The golden snitch is a ball that makes an appearance in all Harry Potter books and movies. It’s a tiny, winged creature that has the ability to fly faster than any other player on the field. In the game of Quidditch, catching the golden snitch wins the game.

Is there a more widely recognized necktie in the entire world? I challenge you to think of one. In Sorcerer’s Stone, Harry’s necktie is red with yellow stripes.

Hogwarts castle is made up of four main buildings: Gryffindor Tower, Hufflepuff Tower, Ravenclaw Tower, and Slytherin Tower. Each tower has its own special characteristics, like the common room, which is where students live during the school year. The towers are all connected by a series of staircases that lead to each other in different ways depending on which staircase you take.

Hogwarts is a magical place. It’s not just the castle, though that’s certainly part of it. Hogwarts is also the people who go there, and the things they do there.

The sorting hat is a wizard’s hat that can speak and sing, and it also has the ability to sort students into the four houses at Hogwarts School of Witchcraft and Wizardry. It has been present since the first book, Harry Potter and the Sorcerer’s Stone, when Dumbledore introduced it to new students as part of their first year at Hogwarts.

The Hogwarts crest is the official symbol of Hogwarts School of Witchcraft and Wizardry, the wizarding school Harry Potter attended.

“I solemnly swear I am up to no good” is a phrase from the Harry Potter series. It’s said by the Marauder’s Map, which is a magical map that can show you where other people are. It was made by Remus Lupin, Peter Pettigrew, Sirius Black and James Potter.

The Deathly Hallows symbol is a circle with a line through it. It represents the division between life and death, as well as Harry’s struggle to find his place in both worlds at once. Carving this symbol is for true Harry Potter fans only.

A printable witch hat for all Muggles wanting to be wizards or witches for Halloween.

Before you grab another pumpkin pasty from the treat trolley, take a moment to reflect on the magical station that only wizards can discover to embark on the Hogwarts Express.

He’s Harry’s best friend and you can bet he looks great carved on a pumpkin. If you’re up to it, that is.

Iconic and classic, this combination screams Harry Potter to all passers-by.

When you choose this Harry Potter stencil, you are really going “next level.” So, let’s do see what you got! Release Sirius from Azkaban and let him loose on your front porch this fall.

He who shall not be named is one of the scariest villains ever, so add a little SCARE to your pumpkin carving.

Get inspired! Take a look at what other Muggles have done to create magical Harry Potter pumpkins.

Let us know which design is your favorite in the comments below!